The training practices used in many communities are setting up emergency response personnel for failure and flawed situational awareness. The sad part is most don’t even realize they’re doing it. When casualties occur, so do investigations. The investigations result in recommendations for how to prevent future casualty events.

The National Institute of Occupational Safety and Health (NIOSH) published a report titled Preventing Risk and Injuries to Firefighters Using Risk Management Principles at Structure Fires. In the report, they chronicle several case studies. In order to keep my articles short, I am going to parse this into four segments and post them over the coming weeks. We’ll start with an excerpt from a LODD case study,  followed by a listing of four (of many) NIOSH recommendations.  In each article in this series, I will offer an assessment of how the firefighters were Trained for Failure and how this meets the definition of insanity (doing the same thing over and over again while expecting the results to be different).

On February 19, 2005, a 39-year-old male career fire captain died after being trapped by the partial collapse of the roof on a vacant, one-story, wood frame dwelling. The 50 year old house was abandoned, in a dilapidated condition, and known by residents in the area to be a “crack house” at the time of the incident.

Crews arriving on the scene could see fire venting through the roof at the rear of the house, with some fire fighters reporting that flames were well above the roofline. The victim was the captain on the first-arriving engine crew, which was assigned to perform a “fast attack”: They were to take a hoseline into the house, locate the seat of the fire, and begin to extinguish it. Thermal imaging cameras were available on scene but not used to locate the seat of the fire. The incident commander walked to the C-D corner of the burning house to size up the situation and determined that roof ventilation was not feasible because of the fire venting through the roof.

The victim and a fire fighter advanced the initial attack line through the front entrance and made their way toward the rear of the house. Conditions deteriorated rapidly as they advanced toward the rear. The fast attack crew had just begun to direct water onto the burning ceiling in the kitchen and den areas when the roof at the rear of the structure collapsed, trapping the captain under burning debris. 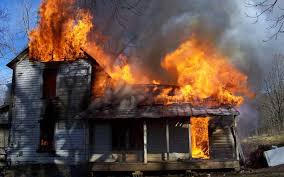 The collapse pushed fire toward the front of the house. Soot and combustible dust particles suspended in the air were quickly ignited along with combustible gases, sending a fireball rolling toward the front of the structure. Before the collapse, two other crews had entered through the front. The rapidly deteriorating conditions following the collapse quickly engulfed the other crews with fire, and five fire fighters received burns requiring medical attention. The victim was pronounced dead on the scene by medical examiners [NIOSH 2005a]. The dilapidated condition of the abandoned structure, fire venting through the roof upon arrival, and deteriorating conditions encountered by the advancing interior crews as the fire escalated were all factors suggesting a more defensive strategy was in order.

NIOSH made many recommendations in their report. There are a few, however, that I would like to focus on to make my point of our insanity:

Using these four NIOSH recommendations above, let’s look at how we train at our burn buildings. In my travels around this country to teach first responders, I have had the good fortune of seeing many training facilities. Most burn buildings I’ve encountered are made of steel, concrete or a combination of the two. The fires are ignited from Class-A combustibles or propane and, for the most part, produce a consistent and predictable amount of smoke and fire. Let’s see how that applies to casualty events.

NIOSH Recommendation #1: A thorough size-up and risk analysis should be performed before conducting operations in any burning structure.

Indeed! However, in order to ensure this will be done at a structure fire, it must be done during training burns. Not once or twice or on occasion. Rather, as the NIOSH report recommends, “in any burning structure.” This means completing a thorough size-up and risk analysis before starting fire attack at every training fire as well. Do we do that? I can’t speak for everyone, but I can tell you that I have observed MANY who do not.

Why not? Because the building is made of concrete and/or steel. There is no risk of the burn building falling down during the evolution. Conducting a thorough size-up of the burn building might be perceived as a waste of time. It might even lead to criticism from firefighters who are anxious to take hose lines into burning buildings and put out fires. This is an important point that cannot get lost here. It’s one that I speak to extensively in my Mental Management of Emergencies classes. Practice does not make perfect. Practice makes permanent. [tweet this] If firefighters are not required to complete a thorough size-up prior to commencing interior operations at EVERY training evolution, their situational awareness will be flawed. Worse, they will not be building the process of completing a size- into the habits formed through repetition. They are being Trained For Failure. To expect firefighters to perform at an emergency scene in a manner inconsistent with their training is INSANE! It won’t happen.

Just once, I’d like to see an investigation report say: Stop training your firefighters to do the things that are killing them. Of course, that would require a knowledge that it’s happening and best practices for how to correct it.

Thank you, in advance, for the gift of your time to read all four articles of the We Must Stop The Insanity series.

I would love to have your feedback. Leave a reply below. Share your thoughts. Join the community and together we’ll improve our safety. Also, thank you so much for sharing links to my articles with your friends and with others in your social media networks. I really appreciate that.

TRAINING FOR FAILURE DVD: You will notice that each time I mentioned “Training For Failure” I have it capitalized. Why? Because TRAINING FOR FAILURE is the name of a training program.  In it, I chronicle nine events and the catastrophically important lessons of how responders are being trained to fail and how to fix the problem. The entire DVD is available by clicking HERE.

This program has been delivered as a general session or keynote address at:

We Must Stop the Insanity: I delivered a keynote address at the Center for Public Safety Excellence Conference in Orlando, Florida entitled: We Must Stop The Insanity. That program provides powerful examples of why the recommendations for improving responder safety are not working and how to fix the problem. Feel free to give me a call to learn how you can get the program!

14 thoughts on “We Must Stop The Insanity: Part 1”